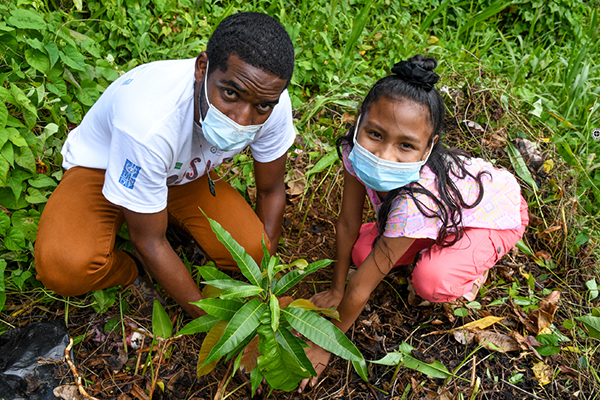 NEW YORK (8 June 2018): “The India-UN Development Partnership Fund represents a distinctive and successful example of how we can advance and adapt South-South cooperation to be timely and responsive to developing country needs,” said United Nations Deputy Secretary-General Amina Mohammed in commemoration of the fifth anniversary of the India-UN Development Partnership Fund. The Deputy Secretary-General thanked the Government of India for its leadership in advancing high-impact South-South cooperation, highlighting that the Fund “has put the knowledge and expertise of the South at the forefront, and encouraged innovation to enhance financing, capacity building, and technical cooperation.”

“My country has a deep and very abiding commitment to South-South cooperation,” said Ambassador Ruchira Kamboj, Permanent Representative of India, speaking at a high-level commemorative event at United Nations Headquarters. The India-UN Development Partnership Fund is “truly a partnership among friends,” the Ambassador said, not a donor-recipient relationship. “Our approach above all is human-centric, based on mutual respect and national ownership. It is a commitment to sustainable development for all.”

The $150 million India-UN Development Partnership Fund, established in 2017 by the Government of India to work with developing countries in a spirit of South-South cooperation, has forged partnerships with 51 partner countries on 66 development projects during its first five years. The United Nations Office of South-South Cooperation (UNOSSC) manages the Fund. Projects are implemented in collaboration with the United Nations system and partnering Governments.

“In the past five years the Fund and the footprint of its activities have grown by leaps and bounds,” said H.E Mr. V. Muraleedharan, Minister of State for External Affairs, Government of India. “Today India and the UN in their collaborative efforts through this Fund are setting new benchmarks for South-South cooperation.”

“South-South and triangular cooperation is the cornerstone of the sustainable development vision and strategy of the UNDP, but also the larger and broader UN system.”

“South-South and triangular cooperation is the cornerstone of the sustainable development vision and strategy of the UNDP, but also the larger and broader UN system,” said Ms. Usha Rao-Monari, Associate Administrator of UNDP. “Without such collaboration and cooperation the transfer of knowledge and transfer of expertise becomes almost impossible… this Fund is one of the important catalysts in the world today to make sure that that kind of transfer of knowledge, expertise and experience occurs.”

Ms. Kanni Wignaraja, Assistant Secretary-General and Regional Director for Asia and the Pacific, United Nations Development Programme, highlighted the example of Barbuda, a beneficiary of the Fund. She said that Barbuda reported going from despair after a hospital and health systems were destroyed by 2017 Hurricane Irma to “quick recovery, through rehabilitation of the buildings, but also building back better with state-of-the-art technology, and then bringing in a COVID response.”

“Even in the face of the global pandemic, the Fund has continued to enhance country-led solutions… Projects have placed a spotlight on the most vulnerable, including women, farmers and indigenous and youth, while also focusing on the transformational impact of South-South cooperation.”

The Fund has a strong focus on many of the global issues of the day, addressed through approaches most relevant to developing countries’ context. These include topical issues include climate resilience, environmental sustainability, renewable energy, gender equality, health and pandemic recovery, education and skills, livelihoods, infrastructure, water and sanitation, agricultural development, and digital inclusion.

Commemorating the fifth anniversary of the Fund, eminent personalities from the United Nations, Permanent Representatives of partnering countries and Resident Coordinators supporting the implementation of projects at country level, exchanged perspectives on the Fund’s results.

“This has been a remarkable journey for resilience, global solidarity, development and success, championed by India,” said H.E. Mr. Lamin B. Dibba, Ambassador Permanent Representative of The Gambia. “India’s historic role in championing the attainment of the global development goals, including the SDGs has revitalized hope among the Group of 77 and Least Developed Countries that the future is bright.”

Echoing the words of her President, H.E. Ilana Victorya Seid, Ambassador Permanent Representative of Palau, said that “India’s generosity and commitment to supporting public health and unparalleled administrative skill will save countless lives.”

The Government of India’s contribution provided for the training of frontline health workers and filled a critical gap during the pandemic and saved hundreds of lives both in the capital and in the provinces and remote areas of the country, explained Dirk Wagener, UNDP Resident Representative in Papua New Guinea. “The provision of this support showed what can be done in times of crisis. It showed that partnership, friendship and solidarity are at the fore of South-South cooperation.”

The India-UN Development Partnership Fund Year-in-Review report was launched during the proceedings. 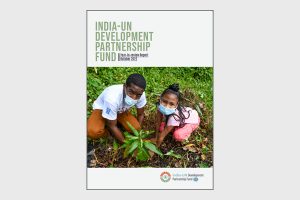 Speaking on behalf of UNOSSC, Ms. Xiaojun Grace Wang, Trust Fund Director, said, the United Nations Office for South-South Cooperation, hosted by UNDP, is very proud to be trusted to serve as fund manager of this innovative partnership for sustainable development. She commended the Government of India, the 12 United Nations entities that are implementing projects at country level, and the 51 countries that are actively engaged in these initiatives for their remarkable successes built in only five years.