Permanent Representative of Brazil to the United Nations

Permanent Representative of India to the United Nations

The India, Brazil, South Africa (IBSA) Dialogue Forum remains a dynamic inter-regional mechanism amongst three emerging countries, three multi ethnic and multicultural democracies which are determined to contribute to a new international architecture, bring their voice together on global issues, and inter alia, advance South-South Cooperation. We remain committed to strengthening the role of developing countries in international policy and decision-making processes that place multilateralism at the centre.

It remains our firm resolve to enhance the voice and representation of emerging and developing countries in the international arena to ensure equal opportunity of development with sustainable and inclusive growth.

Following the establishment of the IBSA Fund by the Prime Minister of India, President of Brazil, and President of South Africa in 2004, the trilateral partnership has been able to successfully support developing and least developed countries (LDCs) in the common pursuit of their broad development objectives.

The Fund is a concrete expression of solidarity and cooperation amongst countries of the Global South, borne out of shared experiences and history and to address developmental challenges.

The Fund became operational in 2006 to identify replicable and scalable projects that can be disseminated to developing countries on a demand-driven basis as examples of best practices in the fight against poverty and hunger. IBSA Fund-supported projects help partner countries in the Global South to achieve their national priorities, as well as all other internationally agreed development goals.

The IBSA Fund is a remarkable example of partnership between developing countries in exchanging knowledge, skills, and technologies and promoting South-South cooperation. Since its inception, it has supported 31 development projects in 20 developing countries. These best practices of what we can achieve together have become instrumental examples, helping developing countries to build and share indigenous solutions in improving the well-being of people, particularly women and children.

India, Brazil and South Africa as the IBSA Member States would like to renew our commitment to promote South-South cooperation through the IBSA Fund in the final decade towards achieving the 2030 Agenda. This cooperation is marked by interdependence with an emphasis on people-centric policies and reforms. We also look forward, in 2020, to jointly celebrating the 75th Anniversary of the establishment of the United Nations.

“Scaling up South-South development success is essential if we are to achieve the 2030 Agenda targets on time. For over a decade the IBSA Fund has facilitated remarkable examples of how countries of the Global South can work together to alleviate poverty and hunger among the world’s poorest. The Fund provides unique opportunities to the developing countries to learn from each other and implement solutions to achieve their sustainable development
objectives.”

“42 years on from the Buenos Aires Plan of Action (BAPA), South-South and triangular cooperation continue to play an indispensable role in today’s development landscape. The IBSA Fund is a shining example of such cooperation — propelling vital human development projects to advance the fight against poverty and hunger. Building upon the inroads we have made together to date, the United Nations Development Programme (UNDP) will continue to work closely with the IBSA Fund to leverage the immense potential of the Global South to advance human development as we enter this crucial Decade of Action in 2020.”

“The IBSA Fund has established itself as a successful model of South-South cooperation. I want to commend the generosity of India, Brazil and South Africa, three great democracies of the South coming together with a mechanism that is both effective and efficient. This Fund benefits from much public recognition, legitimacy and praise for its practical and impactful South-South approach; it makes all of us very proud of the remarkable results that have been achieved. The IBSA Fund is an initiative that UNOSSC will continue to support as a model example of South-South partnership towards the fulfilment of the 2030 Agenda.”

About the IBSA Fund

The IBSA Fund is a remarkable example of cooperation among three developing countries, which pioneered the implementation of South-South cooperation initiatives for the benefit of other Southern countries in partnership with the United Nations system. Its purpose is to identify replicable and scalable projects that can be disseminated to interested developing countries as examples of good practices in the fight against poverty and hunger. The IBSA Fund, which was established in 2004 and became operational in 2006, supports projects on a demand-driven basis through partnerships with local governments, national institutions and implementing partners. Initiatives are concrete expressions of solidarity, and objectives range from promoting food security, to addressing HIV/AIDS, to extending access to safe drinking water – all with the aim of contributing to the achievement of the Sustainable Development Goals (SDGs). A total of 31 development projects have been supported through the IBSA Fund in 20 countries; 8 projects are ongoing, 1 project was recently approved, and 22 projects have been completed.

IBSA Fund Board of Directors

The IBSA Fund Board of Directors comprises the Deputy Permanent Representatives of India, Brazil and South Africa to the United Nations in New York. The Board approves proposals and detailed projects, and continuously provides strategic direction to IBSA projects to ensure their successful implementation through strong South-South partnerships. The Board of Directors is assisted by technical experts, who closely monitor project progress and the Fund portfolio. The United Nations Office for South-South Cooperation serves as the Fund Manager and secretariat of the Board of Directors.

UNOSSC’s engagement with Member States globally and regionally as well as within the United Nations system facilitates practical expressions of Southern solidarity towards the achievement of internationally agreed development goals. UNOSSC ensures that its Southern constituencies have timely access to high-quality analytical planning, mapping, programming and reporting on data, trends and opportunities that will advance South-South and triangular cooperation in ways that lead to successful outcomes. It works with a wide range of partners, including global centres of excellence, to intensively explore how building endogenous capacity can be encouraged, how broadening and sharing technological advances within the Global South can be undertaken systematically, and how emerging innovative financing mechanisms can be harnessed through South-South and triangular cooperation.

UNOSSC is the Fund Manager and secretariat of the IBSA Fund, supporting its Board of Directors as it establishes the strategic vision and programmatic activities of the Fund. The UNOSSC Trust Fund Management Team, working closely with the IBSA Fund experts and partners, provides monitoring, quality assurance and knowledge management support across the IBSA Fund projects.

20 partner countries covered, the majority of them least developed

Development Impact of the
IBSA Fund across the World 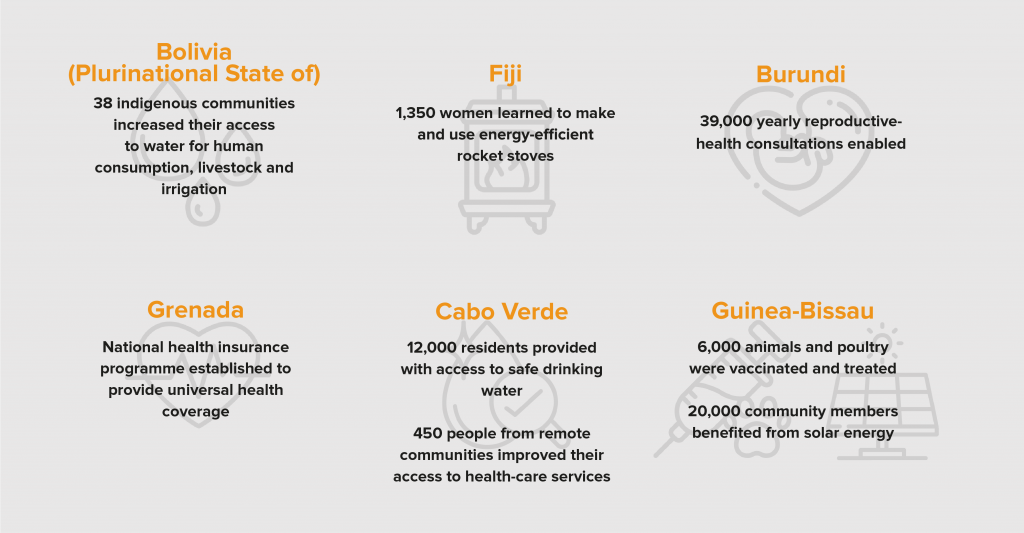 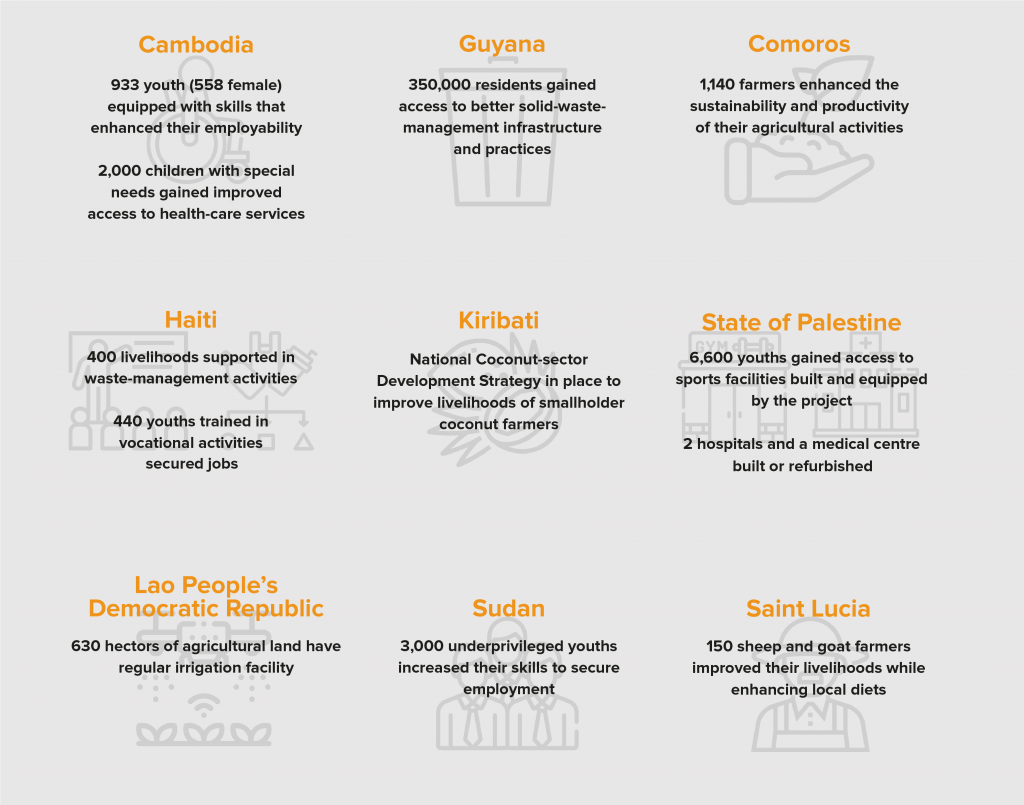 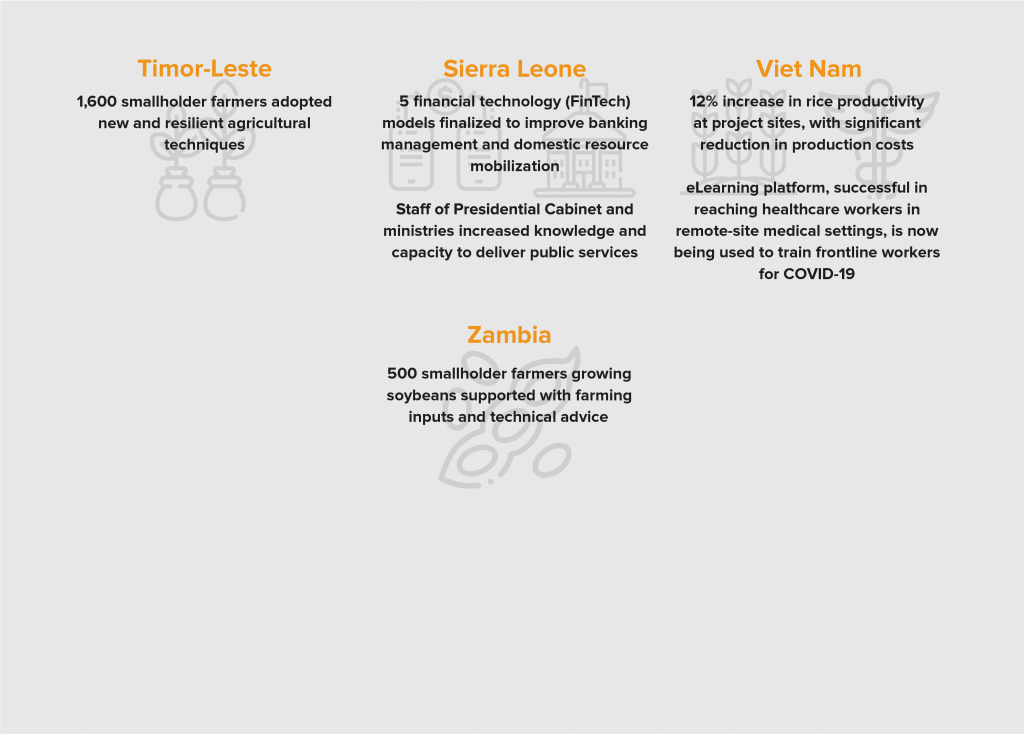 Empowering Children and Adolescents with Special Needs and Their Families

Support for Lowland Rehabilitation and for Agricultural and Livestock Processing

Promote the Socioeconomic Integration of Vulnerable Children and Youth

Support to Integrated Irrigated Agriculture in Two Districts in Bolikhamxay

Rehabilitation of the Cultural and Hospital Centre (Phases I and II)

Establishment of a Rice-seed Production Hub in Hoa Tien

An Innovative e-Learning Approach for Health 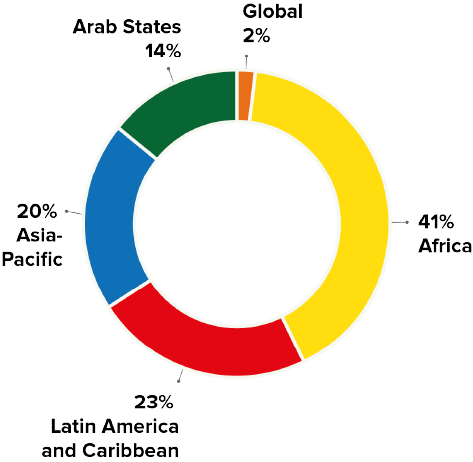 Approved Budget Allocations,
by Development Classification of the Countries, 2004–2019 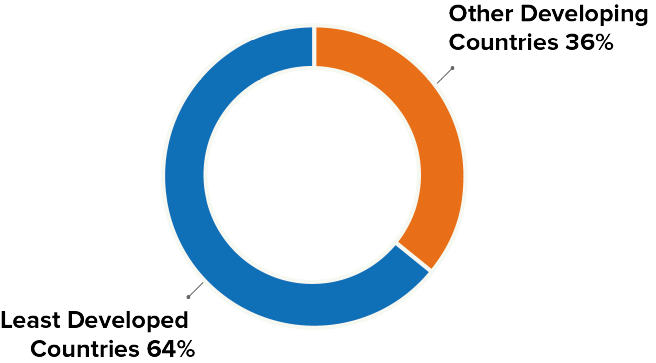