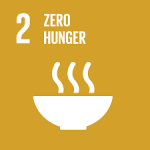 The project aims to contribute to poverty reduction and food security in rural Zambia. It will help the rural farmers to increase their productivity, capacity and income through diversification of the existing cropping system with soya bean cultivation and improvement of the value-chain system.

Link of the Project to National Priorities

The project is anchored to Pillars 7 and 8 of the Seventh National Development Plan, 2017–2021 (7NDP), which seeks to increase the level of support to agricultural and rural development. The 7NDP interventions are linked directly to the strategic priorities of the SDGs and aligned with the 2030 Agenda for Sustainable Development.

The project, funded by the IBSA countries, has contributed towards increased household incomes for project beneficiaries during the 2018/2019 farming season, hence contributing to a certain degree to the fostering of self-reliance of other developing countries such as Zambia.

The project will continue to provide a market for soya beans as primary input to feed into the cooking oil plant. Once the soya bean processing plant becomes fully operational, this will increase the income of the farmers/soya bean producers by increasing the access of their products to appropriate markets.

Back to IBSA Fund Annual Report