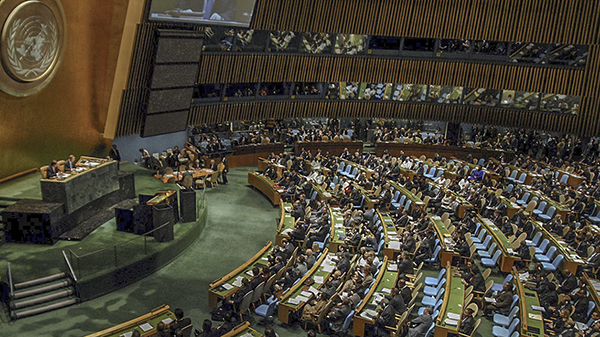 The main policymaking body on South-South cooperation (SSC) in the United Nations system is the High-level Committee (HLC) on South-South Cooperation, a subsidiary body of the UN General Assembly that was originally comprised of representatives of all countries participating in the United Nations Development Programme (UNDP). In accordance with recommendation 37 of the Buenos Aires Plan of Action for Promoting and Implementing Technical Cooperation among Developing Countries (TCDC), as endorsed by the UN General Assembly in its resolution 33/134 of 19 December 1978, a high-level meeting of representatives of those participating States was convened in Geneva from 26 May to 2 June 1980 to carry out an overall intergovernmental review of TCDC within the United Nations development system.

In its resolution 35/202 of 16 December 1980, the UN General Assembly decided to change the name of the high-level meeting to High-level Committee on the Review of Technical Cooperation among Developing Countries and requested the Administrator of UNDP to convene future sessions of the Committee under the same organizational and procedural arrangements as had been made for the high-level meeting. Since 1981, the Committee has met every two years to undertake an overall intergovernmental review of technical cooperation among developing countries (TCDC) within the United Nations development system.

Each session of the High-level Committee is presided over by a president and assisted by a bureau that consists of members chosen from each of the regional groups.

UN General Assembly resolution 35/202 of 16 December 1980 established that the functions of the High-level Committee on TCDC would be the same as those outlined in recommendation 37 of the Buenos Aires Plan of Action for Promoting and Implementing Technical Cooperation among Developing Countries. The Committee is responsible for:

Bureau of the HLC

The Bureau of the HLC is elected by the Committee during a half-day organizational meeting that is usually held three weeks before the biennial session of the Committee.

Sessions of the HLC

The sessions of the High-level Committee on South-South Cooperation have followed the format and working methods introduced at the eleventh session of the Committee, held in May 1999, which include the following:

The duration of the general debate is limited to three plenary meetings and concludes at the end of the morning meeting of the second day of the session. More specifically: