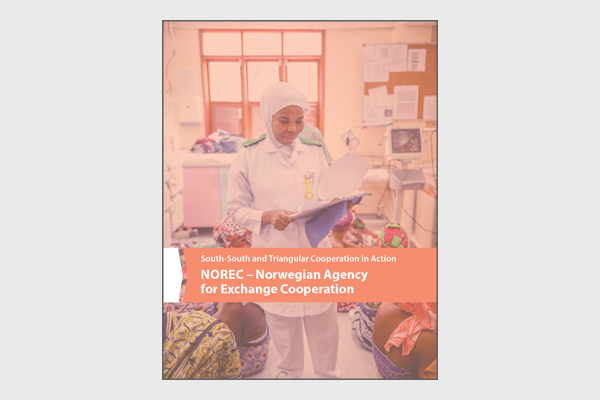 Norway is a keen supporter of the 2030 Agenda and the Sustainable Development Goals (SDGs), and has also a strong engagement in the development effectiveness agenda. The second chapter introduces Norec, the first government institution in Norway to have developed a programmatic approach to South- South and triangular cooperation. What sets Norec apart is its focus on reciprocal exchange programmes and its explicit support to South-

South exchange of personnel within the framework of institutional cooperation. The chapter analyses Norec ́s model in the context of the 2030 Agenda as well as the international development agenda at large. The chapter also describes in more detail how Norec projects are initiated and implemented.

The chapter concludes with a carefully chosen selection of projects which illustrate how Norec works in practice, showing how the projects relate to the SDGs as well as some key development cooperation principles – good practices which hopefully can serve as inspiration for others.

The third chapter discusses Norec’s theory of change which looks at transformation on three different levels: individual, institutional and community/ societal level. Exchange of personnel can be a powerful tool to increase competence on all levels, promote development and fulfil the SDGs. This is also supplemented by evaluations and research. An exciting development is also ahead with Norec as a Centre of Excellence for Exchange

Cooperation. Systematically documenting, collecting and communicating experiences in this field, and networking with relevant institutions both in the South and in Norway will be important tasks in the years ahead.