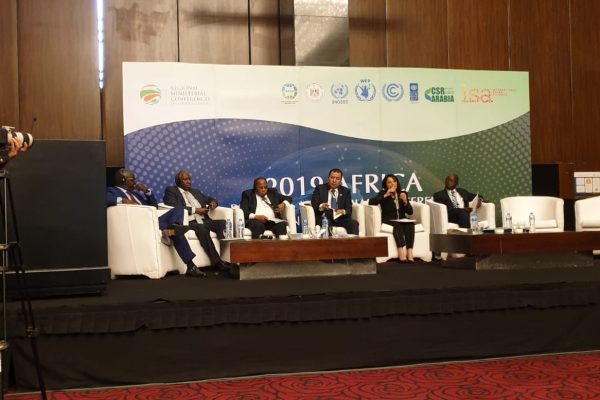 June 17, 2019 – The 2019 Africa Regional Ministerial Conference on Green Economy opens today (Monday, June 17, 2019) at the Dusit Thani Lakeview Hotel in Cairo, Egypt as part of a series of regional conferences being organized in key regions including Asia Pacific, Americas, Middle East and North Africa, Europe and the Commonwealth of Independent States. The conference in Africa is the second of the series which will feature evidence-based green economy solutions in the region that contribute to achieving the goals set under the UN Sustainable Development Goals (SDGs).

During the three-day, participants which include high-level government representatives, representatives from international financial institutions (IFIs), and non-profit organizations as well as key private sector players and civil society representatives from the region and beyond, will take part in various sessions exploring ways to employ green finance to meet SDG goals such as public-private partnerships. It will also discuss the latest regulatory and policy frameworks used by some countries for a green economy. Thirdly, the event will present the ongoing efforts at the national level in terms of capacity-building in line with holistic approaches on green economy.

H.E. Saeed Mohammed Al Tayer, Chairman, WGEO, said: “The African region faces major environmental challenges due to the impact of climate change. However, the region has shown very optimistic and innovative ways to mitigate and adapt to its impact and this presents huge opportunities to change the course of the region’s development as they shift to green economy. Countries in Africa recognize the need to change unsustainable practices to meet the current need for innovation, productivity and job creation and we congratulate the region for continuously taking positive steps forward. The region actively engages in finding sustainable solutions and we see that these efforts will help them meet the targets set under the Sustainable Development Goals 2030.”

The Africa-focused conference is set to build on knowledge sharing and exchange of expertise, which will help enhance awareness among various stakeholders in the region on green trends and opportunities. The event also provides a venue for networking among successful players in the field of promoting green economy practices and aims to boost collaboration efforts within the region.