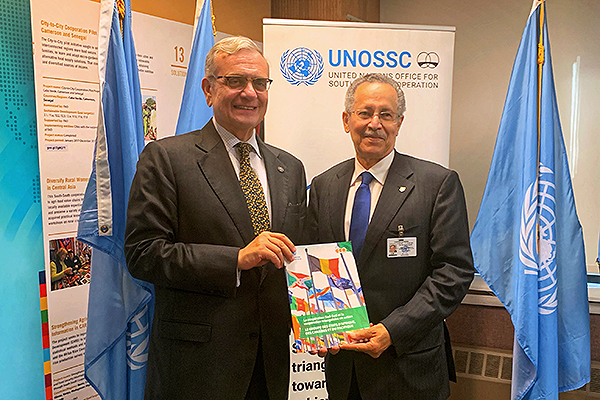 Dr. Gomes noted that on the margins of the UN General-Assembly, EU Commissioner for International Cooperation and Development Neven Mimica held a press conference together with representatives of the ACP countries on a Joint ACP-EU Declaration on the Sustainable Development Goals and the 2030 Agenda. The joint declaration reiterates the shared commitment of ACP and the EU to mobilize in line with the Addis Ababa Action Agenda a full range of means of implementation in the spirit of partnership. In this regard it recognized, among others, the importance of strengthening existing partnerships such as South-South and triangular cooperation for the effective implementation of the 2030 Agenda and the Paris Agreement.

Dr. Gomes expressed interest in the India-UN Development Partnership Fund, supported and led by the Government of the Republic of India. Mr. Chediek explained that the Fund – managed by UNOSSC, and implemented in collaboration with United Nations system partners – is already implementing more than 40 projects, just two years after its launch. These projects, Mr. Chediek emphasized, are in many cases taking place in ACP member countries at their request. The Fund’s work will be showcased at future ACP events.

The establishment on 9 August of the ACP Information Centre for South-South and Triangular Cooperation in Equatorial Guinea was highlighted by Dr. Gomes as “truly South-South cooperation in action.” Following from this, Dr. Gomes took the opportunity of the meeting to present to Mr. Chediek the recent French translation of the first joint ACP Group-UNOSSC South-South in Action publication, which showcases South-South and triangular cooperation programmes implemented in the 79 ACP member countries.

ACP is a strong leader in South-South cooperation and UNOSSC looks forward to continued engagement and collaboration with ACP to ensure its members’ valuable experiences can be shared widely toward achieving the Agenda 2030.