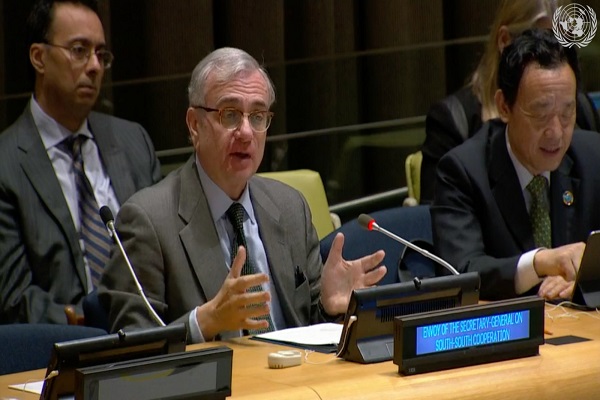 On 12 February, the President of the General Assembly held an interactive dialogue focusing on the ways in which South-South and triangular cooperation in agriculture can be leveraged to address global hunger.

The dialogue built on the Buenos Aires outcome document of the Second High Level United Nations Conference on South-South Cooperation (BAPA+40). To recall, BAPA+40 was endorsed by the UN General Assembly through its resolution 73/291.

The BAPA+40 outcome document identifies agriculture, food security, nutrition and food safety as areas of mutual learning and coordination for South-South and triangular cooperation and emphasizes the value of leveraging these forms of international cooperation to promote sustainable agriculture and food systems. In addition, it highlights the importance of promoting national and collective self-reliance in developing countries.

Watch Video of the Event on Demand

“Hunger is a scourge unbefitting our era!” H.E. Tijjani Muhammad Bande. “We must utilize South-South cooperation and triangular cooperation to achieve SDG2: Zero Hunger… We must redouble our efforts and create policies and conditions that will not only alleviate the suffering of 820 million people who experience hunger today, but eliminate hunger in our world beyond 2030.”

In his opening remarks, FAO Director-General Qu Dongyu focused on where and how investment, innovation, policy and institutional change can help in making agri-food system transformation a driver for achievement of the SDGs. “Our goal is to achieve impact at scale,” he said.

“There is a wealth of agricultural experience existing in the South that has potential to transform the state of food security and hunger in other countries of the South,” said Jorge Chediek, UNOSSC Director and Envoy of the Secretary-General on South-South cooperation. Emphasizing that relevant lessons of development experience and practice can come from any part of the world, Mr. Chediek highlighted, among others, that “Brazil transformed its vast tropical savannah into one of the world’s hubs of soybean production in two decades; through appropriate policy changes, Vietnam turned itself from one of the world’s largest importers of rice into the world’s second-largest exporter; and fertilizer subsidy programs turned Malawi into a net exporter of maize.” 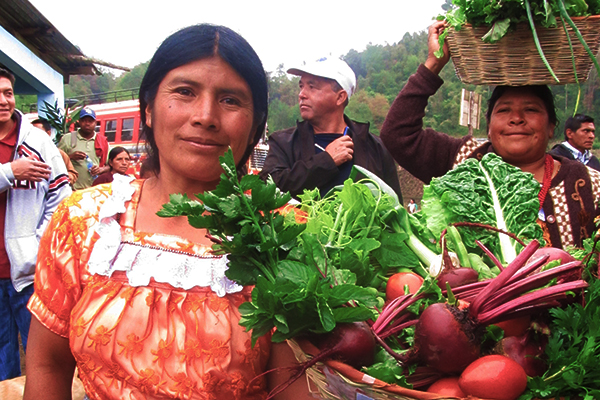 “Business as usual is not an option in fighting hunger,” said the representative of Guyana on behalf of Group 77 and China. “National efforts and South-South cooperation must be complemented by an enabling international environment.”

“Fighting hunger is fighting poverty,” said Jeffrey Sachs, Director, UN Sustainable Development Solutions Network, highlighting that “If we are going to address poverty and hunger, we need a broad based development strategy of training, skills and infrastructure… We haven’t solved the financial aspect of the SDGs at a global scale yet, and that is where their achievement hinges.”

Highlighting progress made in Ethiopia toward zero hunger, panelist Khalid Bomba, CEO of the Ethiopian Agricultural Transformation Agency, explained that Ethiopia is one of the fastest-growing economies in the world because it leverages private sector investments to serve as change agents.

“We believe in the South-South Cooperation because we have tangible experiences proving that it can accelerate to way people operate within food production systems,” said Eneida Rodrigues Silva, Special Advisor to the Minister of Agriculture and Environment of Cabo Verde.

Alexandre Varella, Coordinator of LABEX USA of the Brazilian Agricultural Research Corporation (EMBRAPA) noted that EMBRAPA is committed to develop technologies toward achieving zero hunger and is widely open to negotiate models like South-South and triangular cooperation, especially on topics targeting the eradication of poverty, hunger and malnutrition in Brazil.

Hunger has its genesis in extreme poverty. This is reflected in the data on poverty in Sub-Saharan Africa and South Asia, two of the most impoverished and populous regions of the world.

To address the intertwined issues of poverty and hunger, South-South and Triangular cooperation in agriculture can play a key role. It can be leveraged to galvanize economic activity, create employment, improve incomes, spur innovation and stimulate self-reliance and entrepreneurship in developing countries, which are all essential ingredients for overcoming hunger in a sustainable manner.

A starting point can be to facilitate knowledge sharing in support of smallholders and family farmers, who are the backbone of the agriculture sector in developing countries but remain vulnerable to hunger and malnutrition. This will also enable us to focus, inter alia, on women, who make up a substantial portion of agriculture labor force in small-scale and subsistence farming.

The policy interventions toward smallholders may concentrate on the following four areas:

This four-dimensional strategy would feed into a “food systems approach”- a concept which encapsulates the activities, outcomes and actors involved in agriculture as well as processing, transformation, distribution, retail, marketing, regulation and consumption of food. Such a strategy would support the smallholders and family farmers and promote food security and nutrition.

But every new policy initiative requires fiscal space – an ongoing dilemma for several developing countries. This entails the need for extending greater support to these countries in their efforts to enhance efficiencies in the public expenditure; to mobilize private finance and Foreign Direct Investment (FDI); and to provide remedies to market failures. The current Official Development Assistance (ODA) in LDC’s predominantly focuses on the social sector. There is a need to allocate resources to the productive sector as well, especially as we strive to achieve SDG 2 on Zero Hunger.

South-South and Triangular cooperation can be useful vehicles to support such global endeavors. These forms of international cooperation have the potential to harness local solutions, provide support for a scale-up and propel self-reliance. If rolled out skillfully, they can help develop a regional production network in which LDCs can specialize and expand their role in specific tasks or components in the value chains of agricultural products and services. Such Regional Value Chains would be instrumental in triggering economic activity and providing a stepping-stone for smallholders to gradually establish their competitive advantage, first at the local and then at the regional level.

The growing potential of the global South is already evident: South-South trade accounts for a quarter of the global trade; FDI from Southern firms make up  one third of all FDI flows; and the growth in the Southern world accounts for half of global GDP growth. There is a  need to build on this momentum by reaching out to the “poorest of the poor” and produce more “winner countries” in the South. Indeed, wide spread progress in the South will contribute to regional as well as global peace and stability.

As we enter the decade of action and delivery of the 2030 Agenda for Sustainable Development, we need to make use of all available tools of international cooperation to achieve the target of Zero Hunger by 2030. To reiterate, South-South learning and knowledge exchange in the agriculture sector is one such tool, which should tap the existing reservoir of solidarity between the developing countries. Irrespective of its level of development, every country has something unique to offer.

It is important to note that the 2030 agenda as well as the Addis Ababa Action Agenda (AAAA) acknowledge the importance of South-South Cooperation. The UN Secretary General in his statement at the 2nd High-Level UN Conference on South-South cooperation also referred to the intra-south trade as an instrument for realizing the 2030 agenda. Such avenues of trade are a cornerstone of the SDGs and are part of the Zero Hunger vision of SDG2.